We have upgraded our 7-pin Ultimate Adversary Practice Lock to include T-Pins.  THE most customizable practice lock offered anywhere just got a little better. In addition to the normal assortment of over 100 top, bottom, and master pins and the high security spool and serrated pins, we have now added high security T-pins.  You heard it here first! 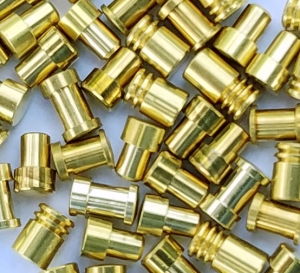 Pinning kits or rekeying kits are an assortment of lock pins in a variety of sizes. These pinning kits allow a locksmith to re-key a lock cylinder to operate with a specific key. These kits are available in two types: .003″ increments and .005″ increments. 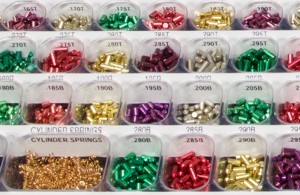 What’s the advantage and disadvantage of either option?

.003″ kits offer more accuracy.  If you are unsure of a pin length or measure a pin incorrectly, you’re introducing less error by having a pin within one thousandths of an inch of any length you need.

Which rekeying pin kit should you choose?  It’s a matter of personal preference and either will work perfectly fine.

We often receive interesting emails from our customers letting us know how they’re using our locks and lock picks.  We received a very cool email this week from Gavin Hougham.

Gavin took our Ultimate Practice Lock and one of our lock picks sets on his trip up Mt. Rainier, one of the highest mountains in the contiguous United States.  Gavin told us that he took his practice lock in case he got bored with the scenery.  This time, he says the scenery won out.  Lock picking is a lot of fun but I’ll agree – the scenery is pretty awesome.

The photo below, posted here with Gavin’s permission,  is taken from 6,400 ft.  As I sit here typing in 85ºF August weather, Gavin gets to play in the snow on the other side of the country.  Click the photo to enlarge. 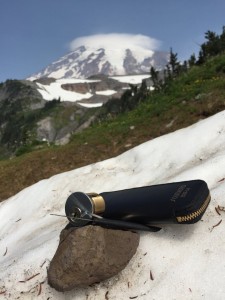 Lock picking is a skill that can be learned in a few minutes. Mastering that skill takes much longer. There are many small lessons to learn as you progress from beginning lock picker to master. Here are the 5 most common mistakes beginning lock pickers make and how to overcome them. If you’re brand new to lock picking and need a basic instruction guide, you can find one here.

How do you know the right amount of force to apply? That’s easy. Open the lock with the key and pay careful attention to how hard you have to turn the key. It’s a surprisingly light amount of force, isn’t it? Some locks may be spring loaded and may require a slightly heavier hand, but most locks turn almost effortlessly. So, how much turning force do you need? A tiny, tiny bit more than you used to turn the key.

Okay, you have the turning force figured out but now you’re pounding away on the pins with your lock pick. You lift, pry, and jamb those pins into submission. But that’s not how a key works. As you gently insert a key, the pins ride ever-so-gently up and down on the cut ridges of the key’s cut edge – until each pin comes to a gentle rest at its proper height.

And, as that key slides into the lock, that key is lifting all of the pins at the same time. You only need to lift one pin at a time with your lock pick. Since you’re doing less work than that key was doing, you’re lifting force can be less than the force needed to insert the key.

Way back before you knew about Tip #1 above, your heavy-handed turning force was making it difficult to lift the pins. But now that you have your tension wrench under control, you can start lifting the lock pins very, very gently. We’ve all bent a pick or two. But if you’re bending picks, you’re doing it wrong – very wrong.

You’re probably familiar with the two most common lock picking techniques: raking and single pin picking (SPP). Both are fine but neither is perfect.

When you rake a lock, you slide a jagged pick in and out of the lock. As the pick slides under the pins, it raises and lowers each pin. If you rake quickly (still remembering Tip #2 and being gentle), you can sort of (gently) bang the pins around until each pin has found the shear line and the lock turns. But not all locks will yield to raking. After raking a lock for a few seconds, you may have 2, 3, or 4 pins set at the shear line and the lock is almost picked. But the remaining pin or two may not be set. Raking will often get you close but not close enough.

Lock picking purists want you to Single Pin Pick every lock. SPP does ensure that every pin has gotten individual attention and it’s the only way to get the feel for what’s happening when you pick a lock. Where raking fails, SPP often works. What’s wrong with SPP? Nothing – except that it can be a very slow way to pick a lock.

So…cheat a little. Rake the lock for a few seconds to set several of the pins at the shear line and then switch to SPP to beat the remaining pins.

You’ve been fighting with a particular lock for a long time. When you release the turning force on your tension wrench, you hear the lock pins drop. You know that pins are being set at the shear line because you can hear them when they are released. But, the lock still won’t open. You’re counting the dropping pins as you slowly let off pressure. With the lock to your ear, you slowly lighten the turning force and you hear 1 click…2 clicks…3 clicks…4 clicks…5 clicks. It’s a 5 pin lock so that’s all the pins there are. How is it possible that all 5 pins were at the shear line but the lock wouldn’t open?

Just because 5 pins are floating – raised in their chambers – doesn’t mean they are all at the shear line. Sometimes pins get pinched and will stay up in the air. Sometimes a pin gets stuck in a position that is higher than the shear line. No amount of lifting with a lock pick is going to fix this since the pin is already lifted too far. This is much more likely to happen if you have a heavy hand and are violating Tip #1 but it can happen at other times too.

The fix? Lighten your turning force until you start to hear pins drop. If one pin is bound above the shear line, you can often let that pin drop back into its normal position by slowly, and slightly reducing the turning force until you hear a single pin drop. If you’re careful (and lucky) you can let the single over-lifted pin drop without losing the other pins that are at the shear line. After you’ve heard that one pin drop – start picking again.

You want the lock pins to stay in the picked position when they reach the shear line. You do not want pins staying in the raised position because they are pinched. Friction is your enemy. Friction allows pins to become pinched. We already talked about using a light touch to reduce the tendency of pins to bind. The other secret to reducing friction is lubrication.

Lock aficionados and locksmiths will tell you not to use any type of oil to lubricate a lock. Oil attracts dirt and dust. Oil mixed with dirt becomes thick, gummy, sludge in a lock cylinder and makes it hard for pins to slide freely. Dry lubricants, such as powdered graphite, are recommended for locks. But, it’s your choice whether to use a dry lubricant or to recklessly throw caution to the wind and squirt a little WD-40 into your lock. Either way, you will find that locks pick easier with a little lubrication.

Fidget spinners just not challenging enough for you?  Maybe you need a fidget toy that challenges your brilliant mind. 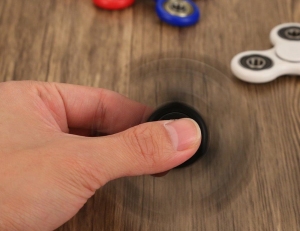 when occupied.  Before fidget spinners, magnetic balls, and squeeze toys were popular, lots of us kept a practice lock and set of lock picks nearby to help keep our brains limber.   When trying to work out a complicated solution to a problem or overcoming a mental block, distracting your mind while keeping it engaged and entertained can get you over many mental hurdles.  Sometimes a brain needs something different to do and lock picks make excellent fidget toys for brilliant minds.

I keep a small set of lock picks and a few practice locks in my desk drawer.  I’ve had these in my desk long before fidget toys were cool.  There have been many times when I’ve been staring at my computer screen but not making much progress on the project of the day.  A few minutes picking a lock was the energizer I needed to get my bored brain moving again.  Giving your brain a different kind of challenge can refresh you, get your mind out of a rut, and get you back to solving problems that had previously been stumbling blocks. 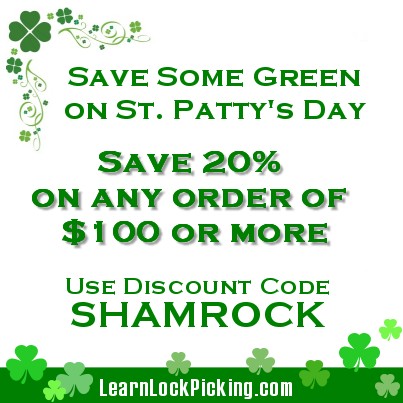 For Christmas 2016, we are offering our two most popular products together at a huge discount.

We’ll continue to offer this combination at a discount until Christmas but the $60 price is only good on these two days.   The “regular” discounted price will be the same as our 6 pin practice lock and will available until Christmas.  Click Here to take advantage of this special offer. 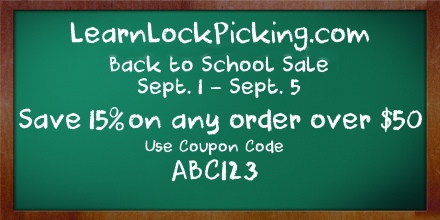 If you’re not familiar with Bosnian Bill, you need to take look at his YouTube channel to see why he has a quarter million followers.  Anything you ever wanted to know about locks and lock picking can be found there.

You may remember that we were pretty excited a few months ago when Bosnian Bill did a video review of our 7 pin challenge lock. We thought the review was excellent and Bosnian Bill’s kind of a big deal around here.

Now, we have more exciting news (at least to us).  We received an order from a customer yesterday and the order included a note that Bosnian Bill had recommended our lock.  We thought that was great – this guy must have seen that video on YouTube   But then, I stumbled upon Bill’s new website:  Lock Lab.  A couple of months ago, I had heard some top secret information that he was working on something new but I hadn’t seen the finished product.  His new site is pretty impressive.

So what’s so exciting about that?   It’s exciting to us because he’s recommending our 6 pin lock to those who want to work their way through his Lock Lab University lock picking course.  Of all the different locks out there, we’re excited that he picked ours! 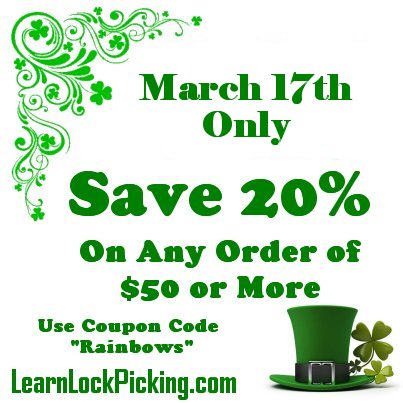